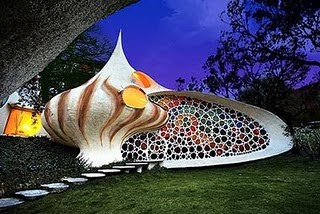 My writing buddies, Erin Cole and Michael Solender have resurrected old six sentence stories based on a picture prompt, The Seashell House and have posted it on their blogs here and here. Thought I'd join them...
The Seashell House
A Mexican couple on the verge of divorce paid an architect to design their old home into a perfect replica of a seashell. Eight months later, they moved back in and discovered they could no longer hear each other speak. The surf of the ocean was too loud an echo. She cried silently for weeks, until the taste of her quiet tears became the salt of his earth. He eventually stopped wiping away her wet kisses, and instead let them dry slowly on his cheeks. They’ve never been happier.
Posted by Angel Zapata at 8:10 PM