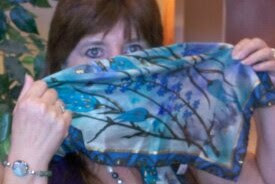 That's right, the woman behind the veil is no other than Harbinger 33's indomitable force, Absolutely- Kate Pilarcik. She lowered her sails and docked here alongside my home in the peach state. Last night, I had the pleasure to sit down with her and share coffee in the lobby of her hotel.

It's always wild to meet someone you've only corresponded with in the virtual world. You really don't know what to expect. Gotta say, I was impressed.

Our encounter began with a warm hug and a somewhat spiritual assessment of each other's unique energy frequencies. A showdown of wills, so to speak. 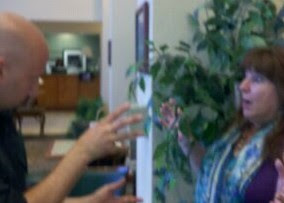 I gave her my best hypnotic horror stare and she easily slipped into a jazz note look of surprise. Yes, I know, a bit odd. But our common goal as writers is to bring the weird back… and I think we achieved that. Anywho, this concentrated vibe spawned not only the makings of inspiration, but also a super-critical caffeine crave.
Hell, she even managed to whip out packets of sweetener (Sweet 'n Low, Splenda and Equal) and incorporate them into an improvised pyramid chart of sorts. I got the (Sweet 'n) lowdown on Harbinger 33, discussed up-and-coming writer conferences she'll be attending, and booked a seat on a future Amtrak, mobile writer's symposium. The woman has a wealth of ideas.

I'm so glad I got to meet her and her sweetheart, Matt.

Oh, and in the middle of our conversation her cell phone rings. She answers it, and then says, “Angel, it’s for you.” 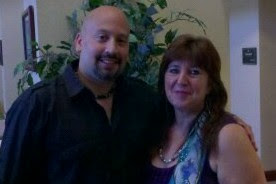 I was like, “Huh?” Turns out, on the other end of that line was no other than central Florida writer, Harry B. Sanderford himself. How cool is that?

For those of you wanting to learn more about Kate, you can find her lurking in the projectionist’s booth At The Bijou.

Kate, you’re an amazing woman. Maybe next time we’ll meet up at the Waffle House and have ourselves some hashbrowns, smothered and scattered.
Posted by Angel Zapata at 7:53 AM 10 comments:

Labels: Absolutely Kate Pilarcik, At The Bijou, Harry B. Sanderford

My interview at 1st Author Interview

1st Author Interview is a dynamite site that allows the author to promote their book and create their own personal interview.

Per their website, K. J. Robinson states, "1st Author Interviews is a unique website that allows you a chance to personally promote your book and allows your reading audience a chance to get to know you! You'll attract more readers, giving them the opportunity to get to know you and your work better. You get your material out there in front of readers, literary agents, publishers and development executives from films, cable and TV. 1st Author Interviews is your first stop to getting your book promoted to that vast online audience. We offer this outlet to any traditional or self-published author, whether in e-book or print formats."

The Man of Shadows reviewed at Darkeva's Dark Delights

Darkeva has done a wonderfully thorough and honest review of my book, The Man of Shadows. Check it out here at Darkeva's Dark Delights.
Posted by Angel Zapata at 11:29 PM 5 comments: